The packages of ramen noodles were handed from one student to the next until they landed in the hands of Zoey Young, whose job it was to place the noodles — and many other food products — in a box that eventually would go to one of the growing number of needy families in Livonia.

It’s important work for Young and the other students in this special class at Franklin High School in Livonia Public Schools, which has seen its percentage of poor students increase nearly 20% between the 2009-10 and 2016-17 school years.

The pantry, which started at Emerson Middle School, has since expanded district-wide, meaning it’s open to families across all schools as long as they have a child enrolled. While many schools keep food on hand for students in need, this pantry may be one of the few full-scale pantries operating in a school building.

The students who help operate the pantry — sorting, packing and stocking the food — all have moderate cognitive disabilities and work in the pantry as part of a job readiness class where they learn valuable employment skills. Math class students — who also have moderate cognitive disabilities — study food prices at multiple stores to determine where they can find the best deals.

Across Michigan, the Great Recession caused a spike in the number of students defined as “economically disadvantaged.” While the economic recovery has enabled those numbers to stabilize in some schools, many others are still experiencing gains. During the 2016-17 school year, 45.69% of the students in the state met the state’s definition for school poverty.

That number jumped to more than 50% this school year because of the state expanding the definition to include students who are Medicaid-eligible and living at the federal poverty line. Before the changes, the definition included only students who qualified for a free or reduced-price lunch through the National School Lunch program, students whose households received food or cash assistance, or students who were homeless, migrant or in foster care.

Since the recession, districts have been beefing up efforts to help students whose needs may extend beyond the classroom. Among efforts in the metro area, including in districts considered well-off:

“We’re providing more support than we have in years past,” said Stacy Kessel, spokeswoman for Gleaner’s. But she said there’s currently a waiting list of schools.

“The need is greater than what we’re able to provide,” Kessel said.

The reasons for the increase in numbers vary. In some districts, it could be a shift in demographics. In the Madison Heights district, for instance, schools have taken in greater numbers of students from communities such as Detroit and Pontiac through the state’s school choice program.

An uneven economic recovery could also be a factor.

“Michigan is still a place where a third of our kids are living in a family where the family doesn’t have secure employment,” said Alicia Guevara Warren of the Michigan League for Public Policy, where she is the project director for Kids Count in Michigan, an effort to measure the well-being of children.

“It’s really important for school boards and districts to really be thinking about how we can ensure our schools have the resources they need,” Warren said.

In Livonia, it was a principal — not a district administrator or the school board — that saw a need for a food pantry. The Livonia district is one of two — the other being in Livingston County — that operates a food pantry through Gleaners. Its organizers also seek out food on their own by brokering deals with local stores.

The Livonia district hasn’t had the biggest gains in needy students in metro Detroit. But Emerson Middle School principal Ann Owen said she could see the need increasing on a daily basis, prompting action from the school and some local business.

“I would go around and talk to staff members — paraprofessionals, teachers and counselors — and everyone had food in their desk (to help out kids),” Owen said.

For Owen, the need to do something stemmed from the emotional image of a child at home “opening the refrigerator or the cupboards and there isn’t food to eat.”

But the effort also has a practical purpose, given the correlation between high poverty and poor academic performance.

“How are you expecting these kids to learn if they’re hungry?” she asked.

But the food pantry isn’t just about serving families in need. It’s also about exposing students with moderate cognitive disabilities to the kind of skills that can help them get jobs when they’re done with school.

“We’re always looking for opportunities to stretch the imagination of what our kids can do,” said Beth Santer, coordinator of student services for the district.

The students stock the shelves. They sort the food. They check for dented and damaged packaging.They pack the boxes. They do inventory. And they load up the vehicles of the families picking up boxes. Distribution happens monthly, though the class meets daily.

“Some people like to put them backwards,” Zoey said. “I don’t know why. I fix it.”

In fact, Zoey finds herself making that fix when she’s out shopping in the community.

A nonprofit organization — called Livonia Kids and Families — was created to be the financial umbrella under which the pantry operates. Donations and contributions have come in from all over the community, with the biggest being from Masco Corp., which recently donated $20,000.

The company, which moved its headquarters from Taylor to Livonia last year, got involved to help kids who may be under stress not knowing where their next meal is coming from, said Susan Sabo, director of communications and corporate giving at Masco, which manufactures home improvement and building products.

“The need is not going to go away,” Sabo said.

Another big supporter is Charles Dardas, president and chief operating officer for AlphaUSA, which manufactures a number of products, including fastener assemblies, clamps and bolts. Dardas provides storage space for the pantry in the warehouse of his business.

The pantry started five years ago at Emerson, with 25 families signed up to receive boxes of food and other supplies. It first expanded to include a portion of the district. Now, with its location at Franklin High, it has nearly 100 families districtwide signed up.

Mary Laughlin is among those who picked up a box on a recent distribution day. She started picking up the pantry offerings around Christmas. The pantry, she said, is helping her deal with financial struggles.

“It helps immensely with my children and my grandchildren,” Laughlin said. “At this point, it’s a struggle.”

She’s also happy that it’s benefiting the students who help run the pantry.

“It’s going to help them once they graduate. They’re already learning how to do for others.”

It was a chilly March day when Laughlin arrived at Franklin High for her pickup. The distribution was a team effort, with junior Jacob Kelly, 17, and senior Jarell Dawson, 18, carrying the heavy box from a cart to Laughlin’s van.

“You see this step,” teacher Tisha Krauss warned Jacob, who was about to step backward off a curb. “Now you’ve got to turn to the side.”

Once Jacob and Jarell had the box in the vehicle, Laughlin offered words of encouragement.

When it was time to pack a box, the students sprang into action. That first involved spreading labels on a long table in a room adjacent to the pantry. Each student picked up a label, then walked to the pantry in search of the product that was displayed on the label. Once the student found the item, he or she walked back to the next room and placed the label and product on the table.

Meanwhile, the students also packed bags full of toilet paper, toothpaste, laundry detergent, soap, deodorant and shampoo. Each family gets a large box of food and a couple of bags of nonperishables.

Along the way, the students are assisted by a couple of their peers who are community service students from general education classes, as well as teachers and paraprofessionals.

At the beginning of the semester, it can take the students as long as one hour to pack one box. Now, they’re packing 10 to 15 boxes an hour, Santer said.

She said an important part of the program is ensuring it has sustainability, both for the families in need and the students who are learning job skills.

Referring to the students, Santer said, “I want 20 years from now to know that there is something in place for students with special needs to get authentic, sustainable work experiences that will further their life. That’s what we’re all about.”

She listened as Zoey and Darionna Dowdell-Jackson, 16, explained to a visitor that they now have specific career goals. Zoey wants to work at Walmart; Darionna wants to work at Kroger. Both, simply, want to help people.

“That goal of them knowing that they want to work in grocery — that is new. They didn’t come in with it.”

Often, kids come in and say, “I want to be a professional baseball player. But the more exposure they get from classes like the food pantry class and the district’s other efforts to expose special education students to work skills, “they become a lot more knowledgeable about what they want to do.”

But it isn’t just about job skills for students like Zoey and Darionna. Ask them why they like giving food to those who need it, and they both say they like helping others.

And how does it make them feel? Darionna answered with one word. 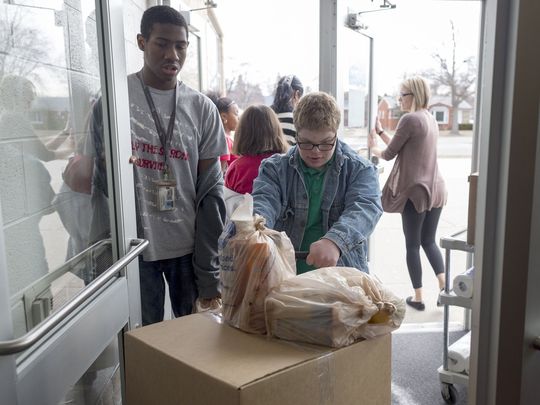 Juniors Damon Cardwell, 16, left, holds the door for Jacob Kelly, 17, as he pulls a cart of donated and packed food and supplies for a family in need at Franklin High School in Livonia on Wednesday, March 21, 2018. (Photo: Elaine Cromie, Special to the Free Press) 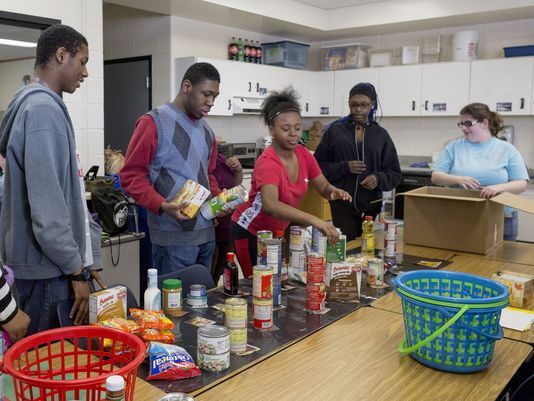 Students in a job readiness class at Franklin High School, with assistance from students completing community service, pack a box in an assembly line at the Livonia Kids and Families Food Pantry on Wednesday, March 21, in Livonia.(Photo: Elaine Cromie, Special to the Free Press) 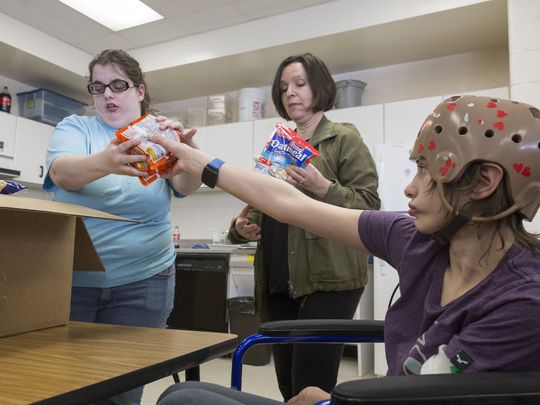 Junior Zoey Young, 16, left, paraprofessional Julie Badge and junior Sidney Jamison, 16, work together to fill a box with donated food and goods to be given to a family in need at Franklin High School in Livonia on Wednesday, March 21, 2018. (Photo: Elaine Cromie, Special to the Free Press) 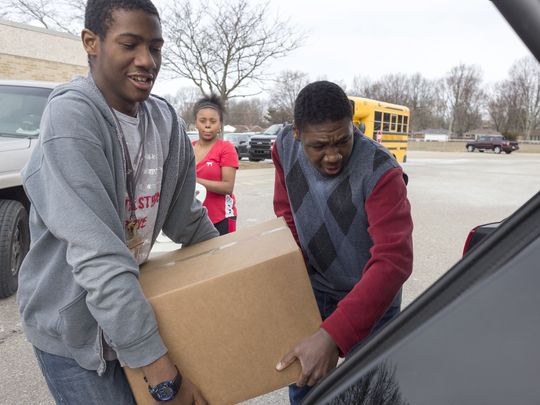 Junior Damon Cardwell, 16, left, and senior Jarell Dawson, 18, work together to pack a box of donated food and supplies for a family in need at Franklin High School in Livonia on Wednesday, March 21, 2018. (Photo: Elaine Cromie, Special to the Free Press)